Thank you for reading!

If you are a NEW Subscriber and just made payment, your E-Edition will be available with the next issue of the Photojournal. (NOTE: If your payment was made after noon on a Tuesday or on a Wednesday, your subscription will be active the following week.)

NEW Subscribers (Print & Digital Only) will need to verify their account the first time logging in by clicking the "Current Print Subscriber" option. Complete requested information and click Claim.

If you are an EXISTING Subscriber, select the "Current Print Subscriber" option. 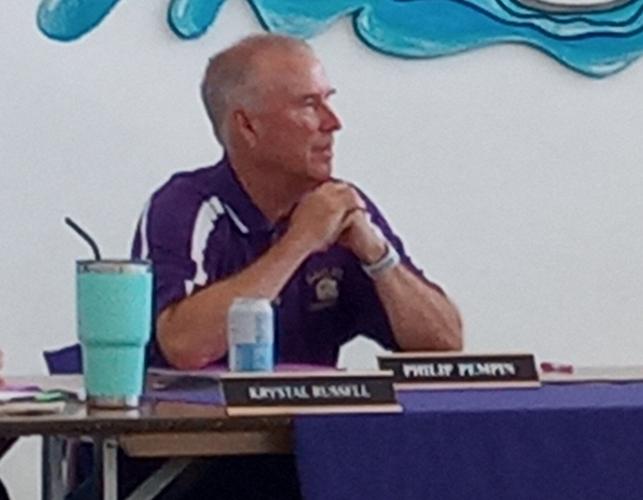 Pempin listens to a presentation by the VHS e-sports team at the July 2022 Vermilion Board of Education meeting.

Pempin listens to a presentation by the VHS e-sports team at the July 2022 Vermilion Board of Education meeting.

There’s nothing like an early failure to bring about a success. But as retired Vermilion Schools Supt. Phil Pempin tells it, that failure got him thinking in a different direction, one which changed the district forever. After 14 years of plays, athletic contests, state report cards, hiring and firing of personnel, and least of all, a pandemic, Pempin officially retired at the end of July, ushering in a new era in the Vermilion Local School District.

Pempin said his early achievement as a superintendent, consolidating all the schools on one campus without going to taxpayers, was brought about by an early and repeated problem of his predecessors – failing a levy. “When I came in, almost immediately, we found a need, based on what our books looked like, to have to put a levy on the ballot, but it failed. It wasn’t a good feeling to fail it.  I didn’t like going to the taxpayers because who wants to pay more money for taxes? No one that you ask. It wasn’t a good feeling to knock on people’s doors and ask them for money.”

At that point, the administration rolled out the reinvention plan and Pempin said it was a decision to have the plan touch every part of the district. “The administration would bear some of the brunt of it, teaching staff and the classified staff would all be touched by it. It wasn’t just looking like we were targeting one group. I thought that that was an important message to send when we first in – Hey, we’re in this together and not focus on one particular group and make them bear the brunt of it.”

In talking with Pempin, he gives a lot of credit to those around him – never an “I did this” but rather, “We did…” About the reinvention plan, Pempin said the school administration, after talking with all the district’s groups, made cuts and put the plan in place, consolidated the buildings, “And I think we showed that we were trying to provide the best product, the best service that we could for our community and do it at a reasonable cost. And, to not keep going back to the taxpayers for money over the time I was there.”

Next on his list was building the new Vermilion Elementary School and the field house. “I think we were lucky. We hit the market at the right time – we couldn’t have asked for better timing in the market. We were the recipient of just good fortune and good timing to be able to buy those buildings and pay what we did for them, and not soon after that, prices just kept climbing. You couldn’t duplicate those buildings for anywhere near that cost now.”

In the midst of that, Pempin and the board brought in the One-to-One Initiative, providing all the students in the school district with their own laptop or tablet. This was done with Apple, Inc. and years later, this program has taken off in other directions. Pempin and select administrators, staff and board members visited Apple Park in Cupertino, CA. “That was a unique experience, and as we predicted though, the laptops have been a blessing, but they’ve also been a curse. You know the drawbacks to those devices with certain kids, and families, and in some situations where they are not closely monitored, I think it can be a downfall for kids. It continues to be one of those products that you have to watch, and you have to be careful of. I think we went into it, we chose the right product with Apple. From the very beginning, we went with Apple and we were able to get the continuous, which most companies don’t offer. If you buy any other product other than Apple, you’re just going to turn them in and not get any money for them. We’ve been able to form and continue a good relationship with Apple since the time I was there in the district, and we offer a good, quality product for our families.” He said he has heard from the outside when Vermilion students move on to college, “It really does and has give them a leg up. They’ve been more prepared by our teachers by using those Apple products as early as and as soon as we did. It has been a real plus that we incorporated them into our daily teaching. It ended up being a positive thing.”

“I think the main thing I remember is the support of the community. I truly do believe this and say this. I think we live in a community the is very volunteer oriented and very willing to pitch in, and go above and beyond any other community I’ve ever lived in. I’ve lived in North Olmsted, Hinckley, Strongsville, and I’ve visited a lot of other communities. I don’t see that type of volunteerism that we have in our community. People were very supportive of me and the district and our children. I think we live in a very gracious community that I was very fortunate to be a part of. Truthfully, all the years I was there, I didn’t get a whole lot of complaints or people saying we weren’t doing things right, or we weren’t supporting their kids. As it got toward the end here in this last year, the climate did change a little bit…but I see that as more of a political climate rather than a school problem. It seems like they are mirroring what they see in politics and they’re trying to bring that into the schools. It has made it a little more challenging this past year with the mask mandates, the critical race theory, and the questioning of what we’re doing in the schools. Truthfully, it’s such a small minority.”

Pempin stressed the community was supportive of the district and everything it tried to accomplish. “I am grateful. I am grateful for the staff and the boards that we had, and the community that we had.” And although Pempin’s first levy may have failed, the district’s safety and security levy did not. “I think the climate, the concerns of society at that time helped us pass it. Pempin said the district can be assured that Vermilion has a plan in place, “And I think that that is something David (Hile, current superintendent) is going to continue with from all the things that I know he is doing. It is a wise thing to continue. You can never be safe enough, and truthfully, you can spend 24 hours a day, seven days a week preparing, and you still wouldn’t be totally ready for something like that to happen. I could not fathom that ever happening. You hope that it doesn’t. But the reality is you can’t spend 24 hours a day, seven days a week on that, so you do the best that you can in the time your have and hope you’re prepared as you could be.”

As for what he would have liked to accomplish, Pempin said the State Report Card was his albatross. “I always said the report card was the only game in town. That’s what you’re judged by, and that’s what people are going to look at, whether we like it or not. If I had one thing where I thought we could have done better, it was having a better score on the report cards. I can’t make an excuse. We didn’t do as well as I would have liked. I have to take personal responsibility for that. I needed to have better training and better professional development offered to our teachers that could have helped them to help our kids. That was on me.” He said, “Were we as good as people around us comparatively speaking? Yes, but it still wasn’t good enough. I wanted us to be the best, and we weren’t.”

In retirement, Pempin said he is fortunate to have six grandchildren, and he said his wife of 42 years, Nahid, who he said allowed him to spend the time that he did and gave him “100 percent support along the way. She was always there for me.” He said, “I’m going to help her now. She owns her own business; I’ll try to be supportive as I can now that I have the extra time. I will be there for her, because she sure was there for me.” He said one of his sons has a business as well, and the other son and daughter-in-law are teachers, “and I’ll be there to support my whole family.”

Eventually, Pempin said he would like to go back and do coaching in the inner city if he has the opportunity. “I miss the kids. One thing about being a superintendent in a school district is it’s difficult to develop those relationships that you did when you were a principal and a teacher. It’s just not same kind of a job. It’s more of an adult-oriented job than a kid-oriented job. “Pempin said he tried to make it that way as much as he could by being in the buildings every day. “It’s just not the same.” Pempin was born and raised in Fairview Park, but his entire career before coming to Vermilion was with the Cleveland Metropolitan School District.

Now that he is retired, that doesn’t mean Pempin will disappear. He has a home in Vermilion and intends on keeping it, and eventually, “We might be here full time.”

“The people were wonderful. They were supportive. I’m grateful I was given the opportunity. I couldn’t have asked for more from our families, our staff, our teachers, from everyone. I just feel gratitude."

Sorry, there are no recent results for popular videos.

Sorry, there are no recent results for popular commented articles.